Straight From the Cube 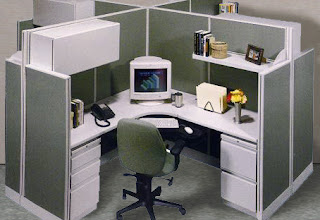 I'm a few years from being 30, which I don't seem to notice as much as I notice how much I want to have a baby but currently do not. Also, I'm not in a relationship, for that matter... I should also add that while I've dated men the last 4 years... before that, my heart belonged to girls. Of course, in that 4 year span I only slept with one guy until I recently started dating and ended up with a guido who wanted me to cater to his every whim, which ended up with me packing his things and leaving him to find some other "bitch" to fight with. I have more self respect than that. I should explain my story, or rather, where I am starting... In the middle.

I work 8-5 in a cubicle, three minutes from my house. I grew up in this beach town, went to college inland and returned home. I didn't get my degree and that's because I never took the time to take it seriously. I remember the panicked feeling of starting college with no idea what I'd be going to do. Everyone said that what I wanted to be would be revealed to me and I'd find my major and everything would be hunky dorey.
Well, it wasn't.

It wasn't hunky dorey after I graduated high school with high hopes of a different life, opportunities, freedom from home and independence. They send you off from grade school, telling you that you'll figure out what to do when you get in the real world but I don't see how that can be a common occurence. One of two things happen... You become the freshman that get shit faced, destroy school property, make bad sexual decisions OR you jump in thinking that everyone will be nice, everything will be fair and things could only get better!

Ok, what did I want to be? A science teacher. But... kids today are seriously a mess. The parents are MY generation coming up to plate and they are so lost in technology and a bad economy that no ones taking care of their kids. Forget that, I can't face a room of 20 students every 2 hours.

So I thought about kids one on one. I want to help people. I was one of the kids that just wanted someone to talk to. I changed my plan to "High School Councelling". Then I remembered that you still have to deal with the crazy parents and kids hormones are quite scary. I am a total empath, so I would definately take all their problems home with me and have nightmares about kids trying to kill themselves. Nope, too stressful.

In the end, I reverted back to my classic talent: Art. I can draw something feirce. I can look at a photo and make it appear on the paper in front of me. And while that was really helpful growing up, being artsy and drawing and collaging my problems out - it still hasn't brought me that much revenue and I decided on this change too late in the game.

One Friday, I went into the registrar to sign up for the final semester only to find that half the classes I picked weren't even being offered until the following semester. My friends were already preparing to graduate and I was going to waste another $5K in loans just to live away from home. So with an hour and a half to decide my fate, I withdrew from the university and headed home.

Since I was home 6 months before everyone else, I got a day job and then added a night job in there too. I never had the expectation to walk out of the university and get a great job; I was a drop out. I had no degree. I was feeling bad for myself for a while until I established my life in an office by day and then working at a casino at night, where I made new friends.

When my other friends graduated school, I was so proud of them but they soon faced the same fate I did... They were working beside me at those part time jobs. I hate to be blunt but their degrees didn't get them anymore than I did. 2006 was not a good year... and it never got better. It's 2011 now and I can say that only a few friends were able to get something out of their degree.

Life is hard. Harder than you think but more doable than you expect. I wish someone had told me what to expect. I wish they had told us the truth about what's out here so we could make educated decisions on our own. There's a $22,000 debt that will follow me for life, that did nothing for me. Although I have enough credits for an Associates, they aren't the right ones. And even though I went through 4 years of school, I can't use that for anything.

Although my methods are madness, my advice might sound less than ethical and my head may be on backwards but if you want to know how I've sorted my life out... Then read on because I will not hesistate to document it, whether it's read by me or by thousands.

I won't sugar coat. I won't censor my thoughts or instances. I will give it to you straight, no chaser. Maybe be a little serious, maybe a little retarded, maybe a little crazy. I am an artist that was born in July. I am a Cancer zodiac. Means I'm very good hearted, but I'm moody as hell. I give a lot of good advice and I'm going to figure out how to get what I want from this life if it kills me.

So, as I start all days from my cubicle of doom - caging the artist that hates to be caged - I've done nothing work related for the last hour and a half. I will go do some work before flaking out and retreating to www.pixlr.com/editor. The online editor that resembles Adobe Photoshop, so I can sell my handmade goods on the internet. God bless technology. ;)
Posted by Little Lady at 6:25 AM No comments:

Little Lady
I work 8-5 in an office; in a cubicle. I am an artist that should NOT be in a cubicle and I'm going to craft my way out of here with a hair-brain idea that will actually work. I hope you follow, enjoy and comment on my story. I also hope to bring entertainment to follow friends also trapped in cubicle land.